The history of the radio - Design in the course of time

Design in the wind of change 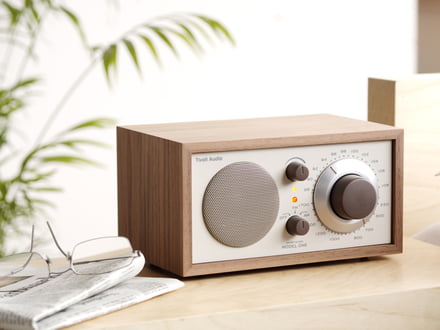 It is in every home, distracting or entertaining us, ousting the feeling of loneliness sometimes: the radio. Pressing the ON button belongs to a morning ritual of most of the people. This is a device we use every day – as a matter of fact, since we don't even perceive it consciously nor do we question its existence. Thereby radios have gone through a huge history development, which is mentionable – the radio system and the device itself.

When the radio started in Germany

The radio is exists by-the-way while it was a revolution in the beginning of the 20s. "You are listening to the transmitting station Berlin Voxhaus, wave 400." – those were the first words of German radio on the 29th of October of 1923. From then on, radio noticeably influenced the lifestyle and life of the following generations.

This development comes from the German physician Heinrich Hertz, who proved the existence of electromagnetic waves in the ear in the end of the 19th century. The precursors of the radio – detector devices and tubular devices – were initially used for military reasons, but that changed on the 29th of October of 1923 – the first entertainment program was sent. It was a one hour program when it started, playing foxtrot – live from the studio. Despite of sceptic politicians, the sender continued working. But the content and the technique were still controlled by the estate during the Weimar Republic. Each device needed to be approved by the "Reichspost" (the German postal service). There were only few listeners in the beginning. Those that weren't able to build a detector receiver, couldn't afford one of the first receivers.

This changed in the end of the 20s: New production methods made tubular radios affordable. The first one widely spread was produced by Audion, which was the Loewe-Audion GmbH back then, for five years in Germany – it was the regional receiver OE333. Siegmund Loewe belongs to the pioneers of radio technique and he is considered to be the "German Henry Ford" in English literature. 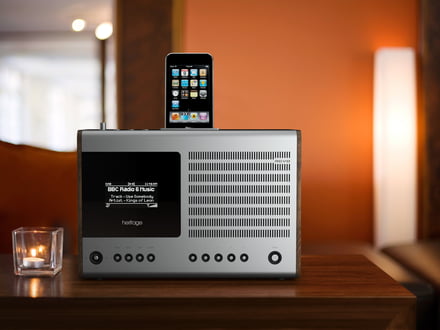 People needed headphones for the first radios. The adjustment of the radio were easily lost, so that the listener had to adjust the sound over and over again. Radios were given a cover in the beginning of the 1930s. The enormous batteries of the ancient devices were replaced by electricity out of the socket.

Designers developed radios in different forms – including longcase clock radios and cassette or desk looks up to cathedrals (image on the left side). The reproduction stopped being only possible via headphones and a funnel served as loudspeaker. These ones appeared as new design elements and they changed radio design again, as well as the variable capacitor to search for senders, which appeared later on. The low space radios needed then made it possible for designers to present one revolutionary object after another. Glossy decorations, elaborated wooden inlets, veneer works and textile coatings made splendorous products out of radios. There were no limits in the size as well: From table devices to music cupboards, there was everything available. 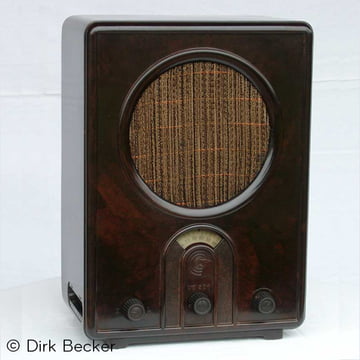 The nationalists controlled radio from 1933 on. The propaganda minister Joseph Goebbels encouraged the development of cheap radios – the NS-era radios – as a mass medium. The NS-era radio or public receptor (image of the left side) was a modern industrial product: Walter Maria Kersting already designed it in 1928. The cover had clear lines and it was functionalistic. It was made of Bakelite, like the typical radio of the 30s, as first synthetic plastic. It was suitable as cheap copy of the Art-Déco-Style, since it was formable, longevity and affordable. In France and the USA it was possible to receive international stations, but this wasn't possible with the NS-era radio. That's the reason why the nationalists used the radio to broadcast their ideology. The NS-era radio was state-subsidised and it was also possible to buy it in rates in order to be affordable for everyone. 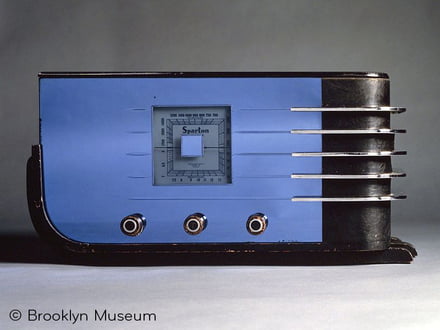 One of the first radios, which was completely made out of Bakelite and which was also leaned on the Art-Déco-Style, was the first Beolit 39 (1938) made by Bang & Olufsen. The name "Belot" comes from the material Bakelite. The prefix "Beo" continues being part of the future production lines of the Danish company. Bang & Olufsen attracted a lot of attention in the 20s and 30s with technical renovations. For example, the company invented a kind of adapter to use the radio plugged at sockets, since it was only powered by batteries before.

The Sparton Table Radio by Walter Dorwin Teague (image of the right side) was as well important for the radio's history back then. The electricity lines design was typical for the 30s, displaying dynamism and letting the rectangular form behind. The radio receiver is in the Brooklyn Museum today.

The beginning of democracy and of radios with cult status 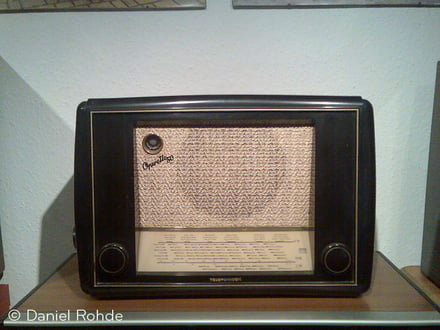 The voice of the last propaganda station became silent shortly after the unconditional capitulation of Germany. It was prohibited to use radios as central instruments for information purposes by the three western victorious powers. Democratic ideas entered the radio program. It was there to entertain, to transmit cultural themes and to educate the people and it was mainly there to inform about what really happened during the nationalism era back then. The stations were given to German hands in 1949 and they came together with institutions like ARD (the working group of German broadcasting companies) in 1950. This was a milestone in the history of the radio.

The first radios with ultra-short-wave reception were produced – including the Operette 50 by Telefunken (image on the left side). Only few listeners were there initially, able to afford the expensive devices.
This changed in the time of the economic miracle. Audio devices emerged, which were technically optimized and which are still produced, having cult status today. Among such radios are the Model One by Tivoli Audio (image of the top), designed by Henry Kloss in the beginning of the 60s. 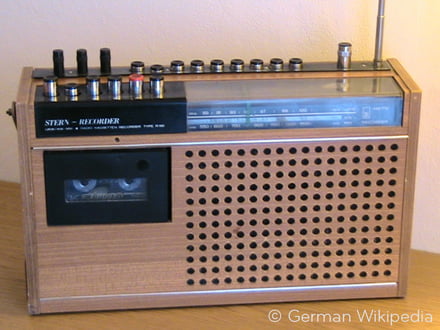 Something we can't really believe today: The listeners of radios switched the device on for a very determinate program into the 70s. The listeners had their favourite time, but not their favourite station. When the television appeared – the big competitor of the radio – the radio became a complementary medium. The listeners didn't wait for "their" program to come. Accordingly the senders offered more alternation, more news, faster reports and a lot of music. The ARD institution started to offer additional pop and service waves. The SWF-3 station "Pop-Show" was a listeners magnet.

The simple, mostly portable transistor radios and stereo device combinations with cassette tape recorders also started to appear in that time, ten years later including CD-players. These box-like radio recorders were widely spread until the end of the 80s.

The radio estate contract of 1987 allowed the general admission of private radio stations. Estate radios and stations received all over the country became popular – a difficult time for the public stations. 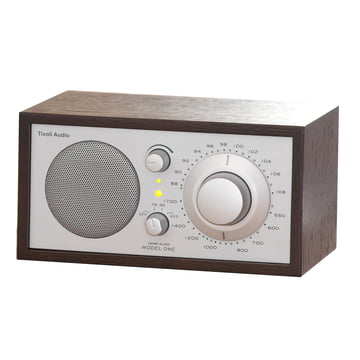 The radio changed with the internet

The radio lost its status as fastest medium when the internet appeared – and it also lost a bit of its relevance. People could listen to music online. Radio stations became more and more present in the internet – with a live stream of their program, but also with an internet side, in order to encourage the communication with the listeners. Moreover uncountable web radios appeared, offering the right music for every taste – all around the clock. Podcasting and audio on demand made it possible to subscribe to determinate programs or to download them in order to listen to them a bit later.

Today's radio devices adapt to the demands of the modern world. But classic style elements aren't renounced, since they offer the characteristic appearance to the radio. One good example for the flowing integration of modern digital technique in classic European design is the Heritage digital radio by Revo (image of the right side). It looks like the radio we know from our childhood before there was the internet radio, bit it offers features like an iPod docking station and it supports internet radio via WLAN for example.
The SuperConnect digital radio by Revo also has a retro-look. Its housing is made of American walnut, the noble and classic appearance comes from anodised aluminium and steel and it doesn't reveal the highly modern technique behind the cover.

The classic objects are completed by numerous new designs of the radio on the market. The technical possibilities and the low space of functions and controlling elements let the creativity of designers run free. This is how radio design of the 21th started to exist without limits and restrictions – regarding the appearance, the function and the materials. A good example: Marc Berthier designed the Tykho Radio by Lexon in 2000, whose surface completely consists of rubber. 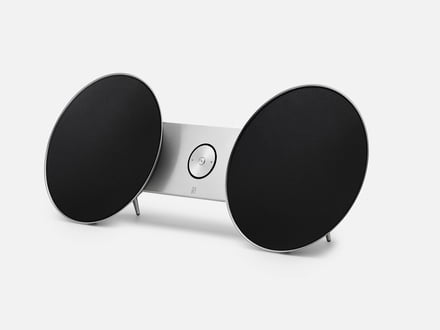 The technique is the focus of attention of other radio designers. Such a radio is the Lexon Flow. The transparent cover doesn't want to hide the technique behind the allegedly simple device, since it is reduced to the necessary.

The modern radios meet the demands of the listeners with more and more features – wireless and battery-regulated, portable, full of real HiFi sound, digital amplifiers, WLAN and Bluetooth reception, touch-control elements and much more. Usability is more and more important in industrial design today. Designers don't only develop the appearance hiding the technique. They want to keep the usability with all the functions and to balance them with an according appearance.