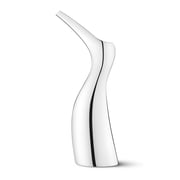 The simple and abstract work of the designer Allan Scharff and the romantic, artistic and handicraft embossed characteristics of Georg Jensen are basically different on the first sight. But both of them have the same source of inspiration – nature. Georg Jensen always said that nature was and is his biggest source of inspiration. His works prove it clearly, since the cutlery is ornamented with blossoms and fuchsia patterns and the jewellery has the shape of grapes.

Sharff says: "Nature has uncountable shapes to offer. It is a fascinating teaching book. The language of nature is visible and direct.", Scharff's works are guided by birds and other natural shapes. It is the wonder of creative genius that both artists start working with the same source of inspiration, but resulting in completely different designs.

Alan Scharff started his professional career as apprentice of Georg Jensen with 17 years. He was trained there as silver smith from 1963 – 1967. Scharff specialized on hollow goods and his final work was a complicated jar, which was designed originally by Henning Koppel. He afterwards continued studying and worked as silver smith for the Hernig Museum of Arts and as counsellor and designer for Hans Hansen, until he started to work again in the Georg Jensen factory, designing jewellery, hollow goods and watches. Allan Scharff also designed ceramic and glass elements of the Royal Copenhagen porcelain, Orrefors and Holmegaard.

Allan Scharff works from his studio in Copenhagen as "designing silver smith" today.

He has been honoured with several awards, such as the World Crafts Council Europe Award 1983 and 1999 with the Bavarian Estate Prize.