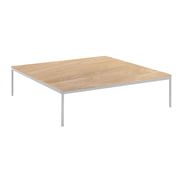 The American architect and furniture designer was born as Florence Schust in Michigan in 1917. Later on she studied architecture, being taught by some great icons of the 20th century, such as Walter Gropius, Marcel Breuer and Ludwig Mies van der Rohe.

As she moved to New York in 1941, she met Hans Knoll, who was just founding his own furniture factory. The design skills of Florence and the sense for economy of Hans, the couple which married in 1946 was soon successful all over the world.

The "Knoll Planning Unit", created by Florence, revolutionized the living and office existence of the 20s: With her know how as an architect, Knoll planned modern, efficiency oriented and logical designs for furnishings in modern offices. The working rooms of companies, such as IBM, General Motors and CBS were realized by the Knoll Planning Unit.

After the tragical death of her husband in 1955, Florence Knoll continued managing the company through insecure times. In 1965 the American finally stopped the daily work. The Post War style of America was noticeably embossed by Florence and Hans Knoll.