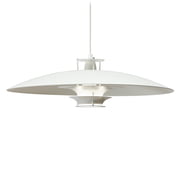 Juha Leiviskä, born in Helsinki in 1936, is a Finnish architect and designer who has become famous for his sacred buildings. He studied architecture at the University of Helsinki and opened his own design studio in 1967, after working for several years at the university's architecture institute.

His most famous works include the Myyrmäki church and the parish centre in Vantaa, the Finnish embassy in Berlin, as well as the international cultural centre Ad Dar in Bethlehem. All its architectural designs have monumental and at the same time intimate properties, with the light incident and the light distribution playing an important role in the individual rooms.
Light is an important factor for a successful building for Leiviskä, which is why light is the central element in all its designs. In addition to his talent for using natural light in his architecture, Leiviskä is also a renowned lighting designer. Its light designs are characterised by subtle and clear shapes, that emit warm light.