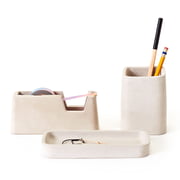 The Magnus Pettersen Studio creates furniture, lamps and accessories. The born Norwegian Pettersen is famous for the connection of counterparts.

Magnus Pettersen left his hometown in Norway to study in the UK. After his graduation, he remained in London, where he also founded his studio in 2010. Since then, his designs are produced by internationally famous brands, such as Iittala, while the Magnus Pettersen Studio also produces and distributes some of the products on its own. One-off productions are also offered.

Pettersen's design approach is characterized by the contrasts, with which the Norwegian-British designer works. The connection of different colours and materials ensured him the description of "industrial luxury" designer.