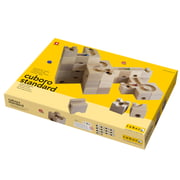 Matthias Etter is the inventor of the Cuboro Marble Track. Etter was born in 1954 in Romanshorn and grew up in Gümligen near Bern.
He completed his apprenticeship as a mechanic, a social educational schooling and then worked with disabled people. He soon had the idea that later resulted in the marble track Cuboro:

"Working with disabled children motivated me to develop special music instruments. For my thesis, I wrote instruction for "sound games in groups". Then I developed puzzles (tailored to the ability of the individual children) and dexterity games. This led to an archetype for Cuboro; a simple component game where some cubes have to be connected to runs and tunnels. If a marble falls out in the end, the mission is accomplished."

As a teacher, he specialised in metal treatment and music. In 1982, Etter purchased a farm in Tuscany where he lived with his wife and his two children. During this time – to be precise, in 1985 – the first version of the Cuboro Marble Track was marketed – at the time under the name of Konstrito.

"Playing is the most natural thing for a child, a fundamental need. It is the beginning of (life) experience through intuition, imitation, animation, creation and so on. Playing helps to discover our skills, the objects in the world and their interactions as well as to create social and emotional relationships with other creatures. As such, playing never stops."

In 1986, the name had to be changed for legal reasons and Cuboro was born. After visiting the trade fair Ornaris in 1986, Etter, in cooperation with the carpentry workshop of Hans Nyfeler and the WWF, organised the production of Cuboro with his roommates in their shared flat. After visits to many other trade fairs, the export numbers of Cuboro increased. In 1997, the company Cuboro AG was founded in Switzerland.

In 2999, Matthias Etter returned to Switzerland from Italy. Since then, he has been responsible for the management, promotion, animation, presentation and development of toys, games and concepts for the company Cuboro AG.