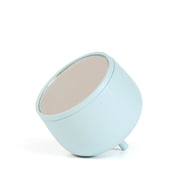 Olivier Gence is a French designer who was born in a suburb of Paris in 1979. He studied industrial design at ENSAAMA in Paris, went to England for some time, and won numerous awards during his Bachelor in design competitions. After graduating in 2004, he worked for a wide variety of designers from Paris and designed furniture and smaller design objects as well as luxury goods, cosmetics and perfume.

Between 2013 and 2015, he worked for the designer Philippe Starck and decided in 2015 to set up his own design studio. His experiences from the various companies are the basis for his good design.