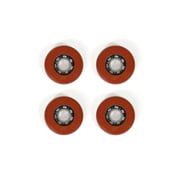 Years of experience out of the tradition of a family company combined with innovative dynamism – Christian and Michael Sieger manage "sieger design" in the second generation after their father Dieter Sieger founded the company.

After finishing school and his military service, he studied European Business. First PR and design projects already started when he was still at school; more intense although during his studies, among others for the design museum London.

Design manager in Munster. The first graphic and product design projects already ran during his school time together with his brother, among others he designed the corporate design for scene bars and fashion stores; the first design award for the development of the "Delphin" tap for Vorberg.

Both brothers Michael and Christian Sieger lead the business of their father – architect, ship-constructer and designer – Dieter Sieger since 2003.

Some of their customers are famous companies such as Conmoto, Ritzenhoff or WMF.

"To take problems as a challenge and solve them with a lot of creativity" – is the demand of sieger design for professional counselling of companies as it was on the first roadwork thirty years ago. The sieger designers live and work together with the whole family in their office completely understanding their business.

Their success proves it all: numerous expositions and desired design awards confirm their design philosophy. Besides the iF Award or the Red Dot Design Award, sieger design already received several nominations for the design award of the Federal Republic Germany, e.g. for their Plaza chimney for the manufacturer Conmoto.