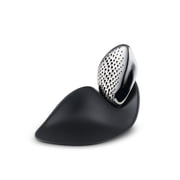 The famous architect Zaha Hadid was born on 31.10.1950 in Baghdad and died on 31.03.2016 at age 65 years in Miami. She was the first woman who was awarded the Pritzker Architecture Prize, the highest award for architects in 2004. Many famous buildings, including the Phæno in Wolfsburg and the National Museum of Modern Art MAXXI in Rome have been designed by her. Her buildings are an imposing, often curvy architectures that have no right angles.

But even smaller objects, such as the Crevasse flower vase designed for the Italian manufacturer Alessi was designed by Zaha Hadid. Even here her unique futuristic and modern design is reflected.

Her love of architecture began in her children's room, which she redesigned. The draft was used by a carpenter as a basis for more children's rooms. As a student she often moved houses and cities. In Baghdad, she went to a Catholic Convent School, in Switzerland and in England, she attended a boarding school.

After studying maths at the American University of Beirut in 1971, Hadid moved to Great Britain, where she studied architecture in London. In 1980, she opened her own architecture office in the British capital. The German architect Patrik Schumacher worked for her, who later became her partner.

Only in 1993, she was allowed to implement her first design, the fire station of the Vitra factory in Weil am Rhein - the beginning of her success. She described her style as kinetic and flowing, because the buildings are formed with few corners and edges.