The design scene meets in Milan from the 14th to the 19th of April. Newcomers and established design brands are presenting new trends and products. What can we expect from the design fair and which events shouldn't be missed? Find the answers in our fair-preview.

Melt – Design and consumer goods come together at Tom Dixon 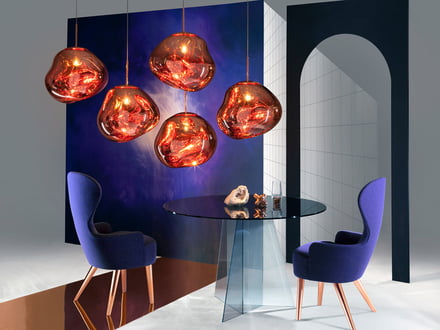 Tom Dixon knows how to present products timelessly, like no other does. Thereby the manufacturer also knows that design is only good if it is sold.
"The design entrepreneur of today can't only focus on goof design of objects, but he must also concentrate on the communication, the contextualisation and the commercialization of his ides", explained Dixon.
In the event of the Salone del Mobile 2015, one of the internationally most important furniture fairs, the designer Tom Dixon therefore created a temporary presentation room in the abandoned theatre Casa dell'Opera Nazionale Balilla in the heard of Milan, for design novelties to be presented with style.

The new Wingback Chair by Dixon and the Melt lamps are going to be seen there, which emerged in cooperation with the Swedish design trio Front . The lamps are Dixon-typically made of chrome or copper and they can't only be observed on the fair, but bought immediately. Moreover a light show and a vip lounge highlight Tom Dixon's time on the exhibition grounds. We expect high class design and entertainment.
Where: Casa dell'Opera Nazionale Balilla, Via Pietro Mascagni, 6, Milan, 15th until 19th April

The 1955 designed chair HC88 only existed as prototype until today by Hans J. Wegner, it was produced for the first time by Carl Hansen & Søn last year in the event of the 100th birthday of the designer. 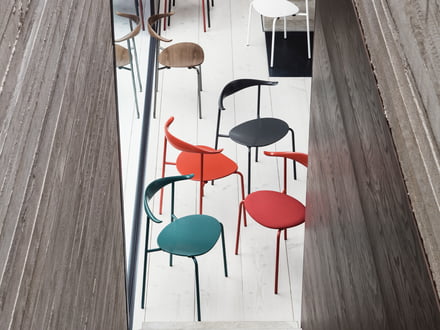 The wooden chair which reminds us of bull's horns with its special backrest, appears with new shine. The new colours of the CH88 Collection come from the original colours assortment of Hans J. Wegner, including two schemes: one range of opaque tones in red-brown, orange-red and petrol-green and a second range of classic and timeless tones in white, grey and black. Moreover it is possible to order the frame out of steel or chrome material. The new frames colours manifest the versatility of the CH88 and its value as modern classic piece together.
Where: Hall 05 - Stand D 04

Alessi also has an anniversary to be celebrated. One of the most famous objects of the manufacturer, the Juciy Salif by Philippe Starck celebrates its 25th birthday and it is presented in two special editions: cast aluminium with matt white ceramic coating and in a limited edition of 299 pieces in elegantly cast bronze, in the event of the birthday. The edition in matt white emphasizes the cultural status of the press as timeless classic whereby the bronze edition emphasizes the sculptural and the contrasting which surrounds the Juicy-Salif since it was first presented. The special edition of the classic juice sculpture is presented by Alessi as a new collector's piece to all Starck fans.

The presentation of the special editions is accompanied by a new exhibition in the Milan Flagship-Store, where visitors are invited to celebrate the Juicy Salif and an oversized edition of the juice sculpture.
Where: Milano Flagship Store Alessi, Via Manzoni 14-16 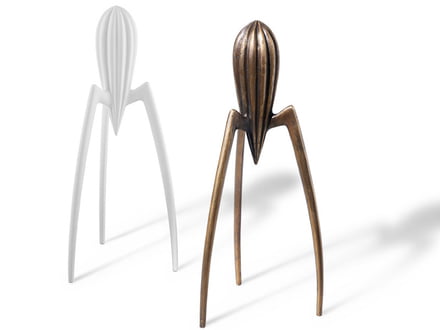 We also expect novelties of the duo Ronan and Erwan Bouroullec , who designed the "Belleville" Collection for Vitra, including versatile chair and table designs. An exciting material mix for inside and outside.
Kartell expands the assortment with eight different room scents for a new "Kartell-Experience".

For those of you who can't get to Milan this time, the pretty fair novelties will soon also be presented in our shop gallery.

Overview of the details