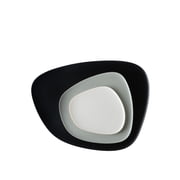 Jean-Marie Massaud was born in 1966 in Toulouse. He studied industrial design at the design school "Les Ateliers": the Ecole Nationale Supérieure de Création Industrielle, in Paris.

After graduating in 1990, he stayed in the French capital with his family, worked with Marc Berthier (born 1935) and began to focus more on architecture there as well. Since 2000 he has led the Massaud design studio alongside architect Daniel Pouzet. Their shared projects include a football stadium and hotel project in Mexico as well as Renault's presence at international motor shows. He aroused special attention with the "Volcano" stadium in Guadalajara, which has a shape inspired by a volcano.

However the Frenchman is also highly prolific as a furniture designer and has received many awards for it. Massaud is often labelled a style icon today and is considered one of the most important French contemporary designers. His works display a strong relationship with natural objects and shapes. Massaud's design of a zeppelin caused a sensation lately, as it was inspired by the shape of a whale.His vision is to accommodate a hotel inside where guests could float above the Earth's marvels.