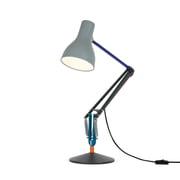 Margaret Howell is a famous British fashion designer. After finishing her studies of design at Goldsmith College in London in 1969, she started the production of jewelry and small accessories until she discovered her passion for fashion.

This led to a partnership with Joseph Ettedgui and the opening of a men's clothing store in the South Molton Street, London, in 1976. The first independent Margaret Howell store was opened at St. Christopher's place in London in 1980. In addition to the sale of men's and women's clothing by Howell, the store was used for design and art exhibitions. By now, the British designer has stores in cities such as Tokyo, Paris, Florence and was awarded with numerous prizes and honorary titles. Every once in a while, she also cooperates with prestigious design manufacturers in creating design objects for the Howell, which are reminiscent of her fashion collections.