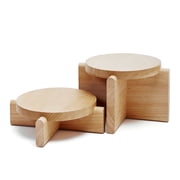 Pete Oyler is a U.S. American designer from the southern states. He received his bachelor's degree in American history and his master's degree in furniture design from the Rhode Island School of Design. He now lives and works in New York City and successfully runs a creative studio together with designer Nora Mattingly. In 2012, Oyler was named one of Forbes Magazine's Top 30 Under 30s for Art & Design, making him one of the most influential young designers of recent years.

As a versatile designer and thinker, Oyler is particularly interested in semiotics in connection with design and the potential of three-dimensional objects. He is also the director and co-author of Outpost Journal, an annual non-profit magazine on innovative art, design and the arts of populations that are usually lost and unnoticed in large cities like New York City.