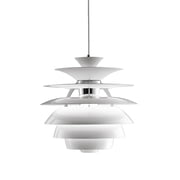 He also began to use methods of traditional functionalist architecture. His professional interest however soon focussed on lighting design – which is what made him famous. He expanded his working area to writing and became a journalist and writer. For a short time at the beginning of World War II he was a leading architect at Tivoli Gardens in Copenhagen. Though like many other creative people, he was forced to flee during the German occupation of Denmark and soon became part of the Danish artist community residing in Sweden.

His life-long collaboration with Louis Poulsen Lighting began in 1925 and lasted until his death. Louis Poulsen Lightning still profits from his genius today. Poul Henningsen was also the first publisher of the business magazine "NYT". The CEO of Poulsen at the time, Sophus Kaastrup-Olsen, gave the magazine to PH as a gift as he had just been sacked from the Danish newspaper where he was working (his opinions were too radical).

Poul Henningsen's pioneering work on the relations between light structures, shadows, reflection and light, compared with the demand for light, remains the foundation of the lighting theory still used at Louis Poulsen Lightning.