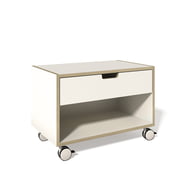 Whoever has dealt with exhibitions and interior design, furniture design or corporate identity concepts in Germany in the last 4 decades – you have to know Rolf Heide, the designer of the stacking lounger, an artistic universal genius, who is never going to deny his spiritual home: apprenticeship as carpenter and the Muthesius handicraft school in Kiel. Since 1960 he is self-employed, counts among the most important European furniture designers and co-invented the discipline of living guidance in magazines. The company Wohnbedarf represents one important station in his life because they used to market his creations (then produced by Müller Möbelwerkstätten) and recently relaunched them. Moreover, Rolf Heide acted as consultant for design-orientated producers like Bulthaup, Interlübke or Vorwerk. In 1999 he received the renowned Karl-Schneider-Prize for Applied Arts and Design.