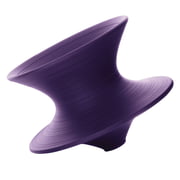 The English designer and artist Thomas Heatherwick was born in London in 1970. After he graduated at the Royal College of Art in 1994 he worked for Harvey Nicholson as designer for a Shop's front.

He founded his Heatherwick Studio in the year 1994 with the aim of "implementing architecture, design and sculptures in one single task". The studio meanwhile consists of 30 employees, among them architects, landscape architects, designers and engineers. Heatherwick's work turns around offices, living room projects, master plans and infrastructure as well as public art.

He curated an exposition in the Design Museum that consisted of 1000 design objects that he collected "every day" in the year 2004. Among his customers there are building promoters, stock corporations, luggage companies, big landowners, museums and private individuals.

Thomas Heatherwick designed the rotary chair Spun for the Italian manufacturer Magis among others, as a product designer.