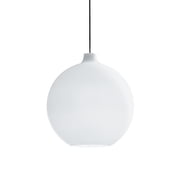 Vilhelm Wohlert, born in 1920 was a Danish architect. In addition to his work on buildings he designed various products that are already traded as a design classic.
Wohlert studied at the art and architecture school in Copenhagen, where he was a student of Kaare Klint, the "father of the Danish furniture school". In 1958, Vilhelm Wohlert started to work with Jørgen Bo at the Louisiana Museum of modern art on a project that lasted 33 years. But the two were not only active in the United States: Wohlert and Bo are also responsible for the Kunstmuseum Bochum and the Gustav Lübcke Museum in Hamm.

Danish churches were another important part of the work by Vilhelm Wohlert: He designed the Stengård Kirke in Copenhagen and restored both Catholic and Protestant churches in the Danish capital. In addition to his work as an architect and designer, Wohlert worked as a lecturer. He taught at the University of California in Berkeley and later at the Royal art and architecture College of Denmark, where he himself graduated before.