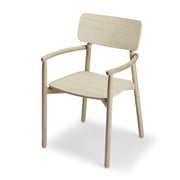 Collaboration between Sweden and Denmark

Hven (Swedish Ven) is the small, idyllic island between Sweden and Denmark in the Öresund. Originally the island belonged to Denmark until it was incorporated by Sweden over 350 years ago. The influence of the two countries, both of which can be seen from the shores of the island, can still be seen today, giving the island, which is known for art and culture, its very special charm. The island between Denmark and Sweden is linked by ferry to the two countries and represents a unique intercultural bridge.

Similarly to the island, the Hven collection is a link between the Swedish designer, who grew up in Landskrona with a direct view of the small island, and the Danish manufacturer. The series includes tables and chairs that symbolically come together at the dining table. The products are made entirely of wood and convince with their refined curves, which give a certain lightness to the massive material.