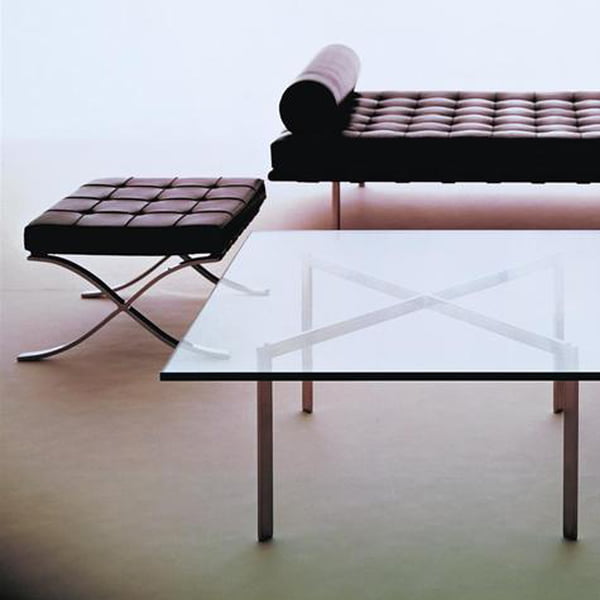 A customer sent us a link of a real bargain shortly: a Barcelona Stool by the world famous Ludwig Mies van der Rohe for only 849 euros! She was more than surprised about our price (3,070 euros) and wanted to know the reason for the difference. The link the customer sent us led us to a plagiarism and ours is the original stool – to be precise, ours is a licensed re-edition of the design classic of the 20s. How do copies, re-editions and originals work in general terms? I asked our design expert Markus Abraham about it. Now I do know: Original isn't original – and plagiarisms are recognizable before they're bought.

"What people understand when they talk about 'originals' are licensed re-editions", explains our team leader of the product management department. "An original, as we know it from paintings, basically only exists once. In the proper meaning of the word it would be the first product (or a prototype), which is produced basing on a sketch. If that first product exists at all, it would rather be exhibited in museums or sold for a lot of money in auction houses like Sotheby's and Christie's." He explained that furniture is produced for the masses, in series contrasting art, at least since the middle / the end of the 19th century. Their design should serve many people. It shouldn't be clearly visible, which piece of furniture out of that first series represents the original at all. Collectors and design-enthusiasts therefore concentrate on the year of production.

The license to produce: Not everyone gets it 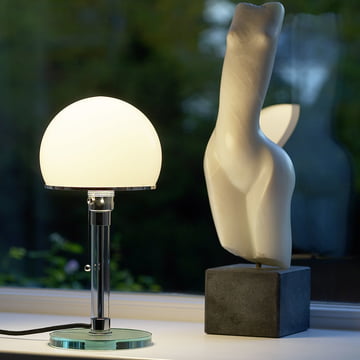 "The original, as it existed in the beginning, doesn't exist anymore", says Markus, "design emerges with computers. The first design can be randomly produced, without being different to other products." Today it is important to fight for patents, licenses and trademark protection. Not everyone gets such a product license. Designers sell their designs or work with a contract for producers. Foundations or relatives regulate the existence, production and marketing of the products of deceased designers. "The company Rosendahl for example works closely with the family of Kay Bojesen. His widow found numerous designs of the years 1935 to 1957 of him on the attic and decided to give them to Rosendahl for their production", knows Markus. "The Rosendahl Design Group produces the collection 'Kay Bojesen Denmark' with Kay Bojesen's family, which is the reason why the wooden figures partly have the names of family members."

The Wagenfeld lamp is produced by Tecnolumen, still according to the original design by Wilhelm Wagenfeld of 1924. Every lamp has an embossed license number under the base. It has the Bauhaus and Ternolumen symbols.

Re-editions: approved optimizations of the original

Not all the design objects are like the original design. They are optimized – partly in cooperation with the designer – along their lives. A good example for such re-editions are the Eames Plastic Chairs by Ray & Charles Eames. The original was made of fiberglass. The plastic material of today didn't exist in the same quality back then. The manufacturer Vitra started using polyamide for seats in the end of the 1990s. Today the manufacturer uses polypropylene.

A similar example is given by the der Panton Chair. This one couldn't be produced after the first series because the plastic material wasn't resistant enough. The design classic was re-edited in the 1980s and 90s. Vitra worked at the re-edition together with the designer Verner Panton.

Licensed re-editions – design objects sold by us at Connox. They're what's closest to the original – made based on the original designs and according to the material standards chosen by the designers.

Plagiarisms and copies – cheap copies and how to recognize them

We talk about plagiarism when patented design objects are copied for little money by a manufacturer who hasn't got the license to produce the objects. The names of the brands or designers ere the face of the product to the public, which is the reason why plagiarisms are named after the original products, without focussing on the design and the material. "The quality of plagiarisms is miles away from the original – or the licensed re-editions", assesses the product manager. "Many plagiarisms are cheap copies and absolutely poorly processed."

Numerous shops live from selling copies. They copy design classics without having a license, using cheap materials and profiting from the lack of information the customers have. These ones wonder about how fast their products have to be replaced. How do you recognize such shops? "In general terms, such shops are often from England and Italy, since those countries have different consumer protection acts. Customers should be careful when shops sell design classics for very little money. Of course there are price differences between the shops that sell originals or licensed re-editions. These differences are often smaller than 20 percent. We should be careful as soon as there is a price advantage of more than 50 percent," explains Markus. 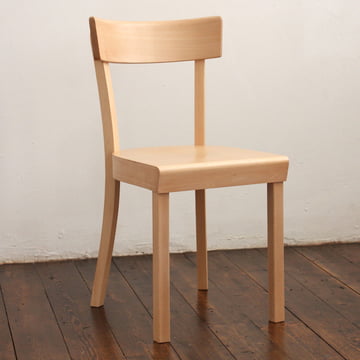 Finally there are the products that deserve their status of being design objects, which they gained along the years, that weren't patented by anyone. A famous example would be the Frankfurt Chair. Max Stoelcker designed it in the 1930s for the exhibition of the Frankfurt Kitchen, a revolutionary kitchen type. 10,000 homes were then equipped with this kitchen type including the Frankfurt Chair. There was a patent, but the model 2200 was re-built so many times and slightly changed by the company "Bombenstabil" back then, that nobody really knows who really made the "original" today. "Namely chair manufacturers also started to change chairs in the details. This is how the Frankfurt Chair became the standard chair for authorities and schools in the 50s and 60s", says Markus. "The traditional manufacturer Stoelcker – who we get the Frankfurt Chair from – has the most direct relation to the history of the chair, but Stoelcker doesn't have a legally valid claim on the "Frankfurt Chair" as well. The name of the chair is an unprotected one."

A consequence of license-less re-constructions is the difference between processing and the quality. "If there isn't an original manufacturer, we focus on the quality. Connox is interested in furniture for generations, not in cheap variants", explains Markus.

The design classic Butterfly Chair by the designers Bonet, Kurchan and Ferrari-Hardoy also belongs to these license-less re-constructions. "Manufacturers like Cuero Design, Weinbaum and Manufakturplus produce this classic piece as close to the original as possible. The single armchairs don't even differ much in their quality", suspects Markus. Another example is the famous Ulmer Stool designed by Max Bill in 1954. This one is produced by wb form today but it is also available as "Sgabillo" stool made by the renowned company Zanotta in a more expensive edition.

A trained eye isn't the only one to differ plagiarisms from originals and licensed re-editions. We are going to present some pieces of furniture offering material and processing differences in the following months.

To the blog homepage
All articles from this category Guide