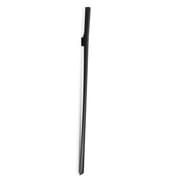 As many other famous Danish designers, Nis Øllgaard studied at the University for architecture and furniture design in Aarhus. He already worked as industrial designer since 1981. According to Nis Øllgaard, good design only exists when function and form act together in logical consequence. The Danish wants to charm a smile on his customers' faces.

Nis Øllgaard finds it essential to emphasize determinate qualities of a material. The material is what makes the function and that's the reason why in his opinion producers should only use the material that fulfils the product's purpose the best. Many different prototypes from Nis Øllgaard emerge for that reasons, until the perfect product comes out of the process.

Øllgaard was already honoured with the Formland Design Award, the iF Award and the Red Dot Award because of his sculptural designs.