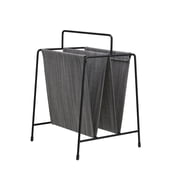 American design from the 50s and 60s

Paul McCobb (1917-1969) is considered one of the most influential figures in American furniture design of the 1950s and 1960s. In order to become a designer, he moved from Boston to New York and made a name for himself in the scene there. He designed furniture, accessories and textiles and also worked as an interior designer.

His design approach is characterised by simple forms without any ornaments. Influenced by the New England style and inspired by Shaker Design, Paul McCobb combines clear lines with sculptural elements. A special clarity and a certain lightness characterize his designs, which are manufactured according to traditional craftsmanship. For his objects he used robust but affordable materials such as solid wood, iron and durable upholstery, which ensured a long life.

His furniture and accessories have lost none of their charm to this day and are now gradually returning to the home through new editions, such as the Planner coffee table by Fritz Hansen.