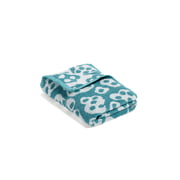 Nathalie Du Pasquier was born in 1957 in French Bordeaux, though the designer has lived in sunny Milan since 1979. As co-founder of the revolutionary Memphis movement, Du Pasquier drew great attention to herself in the design scene from early on.

As a designer at Memphis, the French-born designer's main focus was on textiles, rugs, laminates and also some furniture and small objects. Nathalie Du Pasquier has concentrated mainly on painting since 1987. Her style is abstract, colourful and geometrical, like a minimalist Kandinsky.

Du Pasquier hasn't completely left the design scene with the patterns in her paintings, as design products today decorate her images.