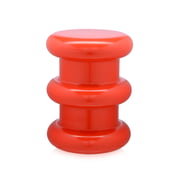 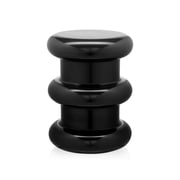 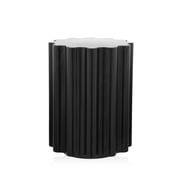 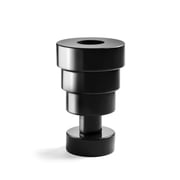 Kartell goes Sottsass - A Tribute to Memphis is a collection by Kartell that was introduced in 2015 as a tribute to the master designer Ettore Sottsass. Kartell goes Sottsass consists of a total of eight vases, stools and side tables and a lamp, which were designed by Ettore Sottsass for Kartell in 2004, but never made it into the range. Fabric samples by the Memphis group of artists also decorate existing upholstered furniture by Kartell, giving it an unexpected post-futuristic look in the style of Sottsass.

The Milanese artists' group Memphis was founded in 1980 by a group of furniture, textile and ceramic designers, after Ettore Sottsass and Michele De Lucchi decided to leave the artists' group Studio Alchimia and start their own movement. In contrast to Alchimia, Memphis wanted to profit from the international recognition of Italian anti-design and market its products profitably in order to become independent from the clients who until then had determined the what, when and how of products. With their individual artistic ideas, which were nevertheless broken by a systematic pattern, the Milanese design group irritated and disturbed the international scene with lasting effect. Memphis questioned the superficial functionality of design objects; as a result, everyday forms were interpreted in a positive, joyful and imaginative way.

The focus is on the furniture as an icon with a high recognition value. Furniture was assembled from elementary shapes such as cones, spheres, pyramids and cubes and coated with garish plastic laminates. The unmistakable look of the Memphis designs, the almost complete renunciation of right angles, the playful aesthetics and inexpedient design blur the line between furniture and plastic to this day.