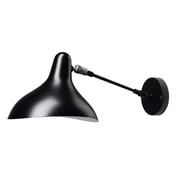 As an admirer of the sculptor Alexander Calder, Bernard Schottlander created the Mantis luminaire series in 1951. As an artist, engineer and not least as a craftsman, he developed a sophisticated system of counterweights, combined with a series of strong and flexible metal rods. He also incorporates shadow into his work in a unique way.
Like an acrobat floating in the air, the lamps of the Mantis series appear and thus become a real eye-catcher in every ambience. The DCW Mantis series includes table lamps, ceiling lamps, wall lamps and floor lamps.