Palomar emerged out of the passion for optical devices, meteorology and cartography – an Italian company that specialises in innovative travel products. Smart products for the modern globetrotter. 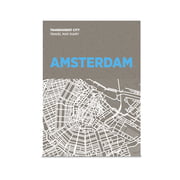 Palomar is a design company that was founded in 2001 in Florence. The products and designs that Palomar develops are repurposed everyday objects.

Palomar emerged out of the passion for optical devices, meteorology and cartography – an Italian company that specialises in innovative travel products.

Palomar developed out of Paim, which was founded in the 50s and which brought the Miranda camera from Japan to Europe. Palomar became a pioneer in 1956 by importing the first reflex cameras from Japan.
In the 60s, Paim extended the range to a variety of optical devices such as telescopes, binoculars, microscopes and meteorological instruments. Fabio Palchetti, son of the company founder, took over the company in the 90s and finally founded Palomar in 2001 together with his wife Cristina Cencetti. Named after the world's largest observatory in the United States, Palomar is dedicated to innovative projects about the observation of outer space.

Since 2008, Palomar has cooperated with national and international designers to implement innovative projects. Palomar develops innovative products about geography, travel and cartography, such as the excellent crumpled city map. Everyday objects and reimagined objects - this is the claim of Palomar.