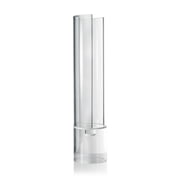 Arwed Guderian is a designer who studied fashion and industrial design at the Hochschule für Künste in Bremen /Germany. He also gained practical experience as a designer in renowned studios, as well as employee of a cabinet maker. Since 2014, he runs a multidisciplinary design studio in Munich.

His works have been shown in the German Museum of technology (Berlin), DMY (Berlin), Platform (Munich), UNICAL (Cosenza) and Wilhelm Wagenfeld Haus (Bremen). In 2016, he was awarded the German Design Award for his Gerhard lantern.