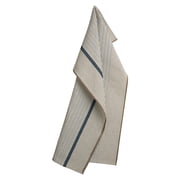 The textile engineer and designer Bent Georg Jensen (1923-2014) was the director of Georg Jensen Damask from 1947 to 2011. Even as a ten-year-old boy, he learned how to weave in his summer holidays and actively helped in the company every free moment. After the unexpectedly early death of both his parents, he supported his brother in the management of the weaving mill, which his grandfather had founded in the 1930s. After the death of his brother in 1947, he was appointed director of the weaving mill at the age of 24.

Under his leadership, the company in Kolding grew brilliantly. In 1963 a new factory building with the latest weaving machines from England and France was built. He was also able to gain prestigious designers and weavers such as Arne Jacobsen, Cecilie Manz, Andreas Engesvik, Margrethe Odgaard and Nanna Ditzel for some collaborations that are still part of Georg Jensen Damask's collection. Jensen was also a member of the first advisory committee for the textile line at the design school in Kolding.

Bent even designed some of the most famous textile series of the company. The launch and re-establishment of the historical patterns "Queen Margrethe Tablecloth" and "H.C. Andersen Tablecloth" are among his successes. Bent Georg Jensen had been at the top of the company for more than 50 years before he sold it and retired in 2011 at the age of almost 90.