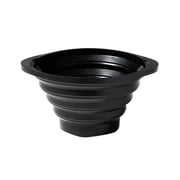 Boje Estermann was born in 1961 and first of all, he worked as CEO for a French company for 8 years. Eventually, he decided to change his career and attended the design school "ENSCI- Les Ateliers" in Paris where he graduated in 1999. In 2000 he founded the design studio - Requæst – in Paris.

The idea of the funnel came to his mind during a gradation ceremony. He wanted to develop single components that don't need a lot of space – that was his fundamental idea. Thus, the funnel with its shape is a product that can be bothersome if not in use, since it needs a lot of space and it is hard to stack. A funnel, however, is a very helpful product and a must-have in every kitchen. He got the idea of the foldable funnel when he held his new camera in his hand and saw the foldable sun protector.

Today, Boje Estermann develops products for international design companies, among them Normann Copenhagen, deDanaë in Tokyo and Kobe in Japan.