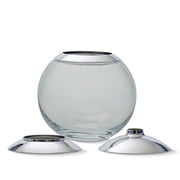 Boris Kupczik experimented with different materials as a young man in his father's workshop. He created various objects of daily use, predominantly from metal or the material produced by the Elbe River in Germany after flooding. Mainly without creating designs and following spontaneous ideas, Kupczik experimented until he was happy with the result - a process which Boris Kupczik wanted to develop and continue.

The designer still works exactly the same way today. "Creative thinking and ideas can be difficult to enforce. It's helpful to just get going - either with paper and pen or on the computer - and just go from there. Ideas and images come into my mind which in turn put me onto another track, so one thing leads to another.The largest part is however simply working, though occasionally the muse also kisses me..."