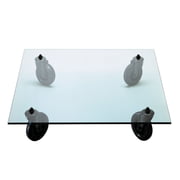 Gae Aulenti was born on the 4th of December 1927 in Italy. Her whole name is Gaetana Aulenti. She is an architect, an interior decorator and a designer. As one of the few women she made herself a name on her own in the Italian design of the post-war period.

For the 13th Triennale in Milan she designed the prize honored Italian Pavilion in the year 1964. As a consequence she took place at several following Triennales and received more lecture-assignments travelling through the US and Europe as a guest lecturer. As product designer she went through a long and productive connection with the Italian furniture manufacturer Zanotta.

From the 1970ies on Gae Aulenti became internationally famous. She was not only involved at many expositions and construction-projects, but she also penned essays and designed products. Among others she redesigned the museum for modern art in the Centre George Pompodou, she lead the reconstruction of the Palacio Nacional de Montjuic in Barcelona to the Museo de l'Arte Catalana and she was involved in the construction of the Palazzo Grassi in Venetia. For FontanaArte she designed the flat sofa table Tavolino con ruote.