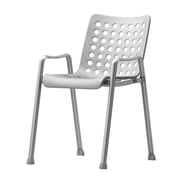 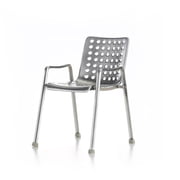 Hans Coray studied literature until 1929 and then became teacher in Aarau and Zuoz in 1931. Between 1932 and 1938 he continued studying design, astrology, theology and graphology. He also designed some metalwork and chair models here.

In 1938 he designed the light "Landi" chair, made of perforated aluminium, for the "Swiss National Exhibition" in Zurich. The perforation on this chair didn't just reduce its weight, but also made the chair ideal for outside usage as water could drain without any problems.

In 1941 Coray attended a metalwork course in Zurich and worked as a freelance designer, artist and art dealer from 1945. During the Second World War, he designed numerous exhibitions for Swiss chemical companies and in the late 40s designed numerous pieces of furniture from aluminium, steel tube and wood which were sold as part of the demand for housing.

In the 50s he designed more chairs and afterwards focussed his attention on fine arts exclusively. Coray's sculptures, mostly metal, were exhibited in Zurich between 1950 and 1985, in Bern in 1951 and in Cologne in 1981.