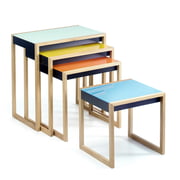 Albers was born in Bottrop, Westphalia (Germany). He studied art in Berlin, Essen, and Munich, before enrolling as a student at the prestigious Weimar Bauhaus in 1920. He began teaching in the preliminary course of the Department of Design in 1922, and was promoted to Professor in 1925, the year the Bauhaus moved to Dessau.

With the closure of the Bauhaus under Nazi pressure in 1933, Albers immigrated to the United States and joined the faculty of Black Mountain College, North Carolina, where he ran the painting program until 1949. At Black Mountain his students included Robert Rauschenberg, Cy Twombly, Ray Johnson and Susan Weil. Weil remarked that as a teacher, Albers was "his own academy" and said that Albers claimed that "when you're in school, you're not an artist, you're a student", though he was very supportive of expressing one's self and his or her own style when one became an artist and began his or her journey.[2] In 1950 Albers left Black Mountain to head the Department of Design at Yale University in New Haven, Connecticut, until he retired from teaching in 1958. In 1962, as a fellow at Yale, he received a grant from the Graham Foundation for an exhibit and lecture on his work. At Yale, Richard Anuszkiewicz and Eva Hesse were notable students. Albers also collaborated with Yale professor and architect King-lui Wu in creating decorative designs for some of Wu's projects. Among these were distinctive geometric fireplaces for the Rouse (1954) and DuPont (1959) houses, the façade of Manuscript Society, one of Yale's secret senior groups (1962), and a design for the Mt. Bethel Baptist Church (1973). In 1963 he published Interaction of Color which presented his theory that colors were governed by an internal and deceptive logic. Also during this time, he created the abstract album covers of band leader Enoch Light's Command LP records. Albers continued to paint and write, staying in New Haven with his wife, textile artist Anni Albers, until his death in 1976.