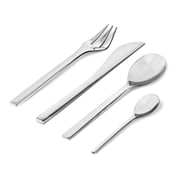 Massimiliano Fuksas was born in 1944 in Rom, where he graduated in 1969 at the University La Sapienza in architecture. In 1967 he opened his first office in Rome, later, 1989, the one in Paris and in 1993 another one in Vienna. Massimiliano Fuksas lives in Rome and Paris.

He was visiting professor at several Universities, such as the École Spéciale d'Architecture, the Akademie der Bildenden Künste in Vienna, the Columbia University in New York and the University La Sapienza in Rome.

In 1998 did he win the career award Vitruvio International in Buenos Aires. He was awarded the Grand Prix d'Architecture Française in 1997 and in the following year he was nominated as the National Academic of San Luca and as the Commandeur de l'Ordre des Arts et des Lettres de la République Française. In 2002 did he win the Honorary Fellowship of the AIA.

From 1998 to 2000 did he lead the VII international Biennale of Architecture in Venice, «Less Aesthetics, More Ethichs» and since January 2000 he is responsable for the architecture area of the weekly magazine «L'Espresso», which was founded by Bruno Zevi.

His job concentrates on the realisation of public works, the University buildings and large town buildings.