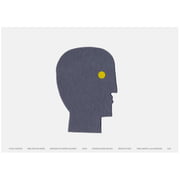 Domenico Paladino, who is known to the public as Mimmo Paladino, found the way to arts by his uncle, the artist who taught his nephew traditional painter techniques when he was a young boy. Born in 1948, he studied arts at the University in Benevento, near his hometown Paduli.

Paladino initially experimented with collages and frottage inspired by Max Ernst and Pail Klee. After his studies in 1968 he emancipated automatically from his idols and only painted autodidactic, free. Until the middle of the 1970es, Paladino developed his characteristic, frieze-like technique by painting large walls with pastel colours. This time was embossing for the late work of the artist. Already in the following years Paladino reached over-regional recognition.

Besides Sandro Chia, Francesco Clemente and Enzo Cucchi, he counts to the most famous representatives of Italian Trans-avant-garde today. The influences is especially distinctive in the "Young Wild ones" in Germany. Paladino is an honour-member of the Royal Academy of Arts in London today. His works are viewable in the Metropolitan Museum of Arts and in the Museum of Modern Arts in New York. He lives and works in Milan and Benevento.