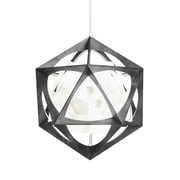 Ólafur Elíasson is driven by his interests in perception, movement, embodied experience and self-esteem. He strives to make the concerns of art relevant to society as a whole. For him, art is a decisive means of transforming thought into action in the world. Elíasson's works include sculpture, painting, photography, film and installation. His practice is not limited to the museum and the gallery, but involves the general public through architectural projects, interventions in urban space, art mediation, policy making, sustainability and climate change.

Elíasson was born in 1967. He grew up in Iceland and Denmark and studied at the Royal Danish Academy of Fine Arts from 1989 to 1995. In 1995 he moved to Berlin and founded the studio Ólafur Elíasson, which today comprises more than a hundred team members, including craftsmen, architects, archivists, researchers, administrators, cooks, programmers, art historians and technicians.

Since the mid-90s Elíasson has realized numerous large exhibitions and projects all over the world. In 2003 he represented Denmark at the 50th Venice Biennale with the blind pavilion. Later that year, he installed the weather project in the turbine hall of the Tate Modern, London. In 2014, Riverbed filled an entire wing of the Danish Louisiana Museum of Modern Art with stones and water and simulated a river in a rocky landscape; later that year, Contact formed the first exhibition at the Fondation Louis Vuitton, Paris. Verklighetsmaskiner (Reality Machines), at the Moderna Museet in Stockholm in 2015, became the most visited exhibition of a living artist in the museum. In 2016 Elíasson created a series of interventions for the castle and gardens of Versailles and showed two major exhibitions.

As professor at the Berlin University of the Arts, he headed the Institute for Space Experiments (2009-14), a five-year experimental program for art education in the same building as his studio.

In 2012 he and the engineer Frederik Ottesen founded the social enterprise Little Sun. This global project provides clean, affordable energy for communities without access to electricity, promotes sustainable development through the sale of Little Sun solar lamps and chargers, and raises global awareness of the need for equal access to energy and light.

Elíasson and the architect Sebastian Behmann founded the studio Other Spaces in Berlin in 2014, an international office for art and architecture. As an architectural counterpart to Studio Ólafur Elíasson in the same building, Studio Other Spaces focuses on interdisciplinary and experimental construction projects and works in public space.

Elíasson lives and works in Copenhagen and Berlin.