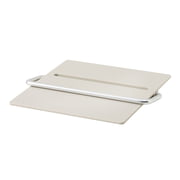 Rasmus Halfdan Breck was born in 1965 and graduated at the Design Schook in Denmark where he focussed Furniture Design. Since his graduation in 1992 he works as industrial designer.

Breck was partner and creative director of the company CPH Design from 1995 to 2010, which was honoured with the Danish Design Prize and the Red Dot Award in 2007. Since 2010 he runs his own studio named RHB Design, where he works for Danish as well as for international customers.